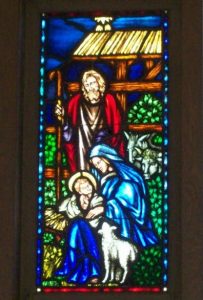 1926 -The first beginnings of this two-part congregation was in 1926, when a young Pastor, the Rev. Paul Brauer, of Prior Lake, gathered a small group of Lutherans for worship and Sunday School in a little real estate office building on the corner of Bloomington Avenue and 66th street.

1928 -The building, “House of Mercy” was actually a part of a congregation, Mt. Zion Lutheran Church, which had another chapel located on 57th Street and 10th Avenue, built in 1928, when a congregation had been formed. A congregation was organized and a small chapel was built at 57th Street and 10th Avenue, two blocks from the nearest house. (A District official’s wife asked, “Why build way out here?” Answer: “We build churches in the country, too.”) The present Mt. Zion worships in a beautiful church at 57th Street and Chicago. Difficulty in travel over the swamp and around the lakes, and a small increase in numbers, caused the south-siders” to begin worship services in the Richfield School gym and plan their own building. Since most of the officers of Mt. Zion were “south-siders”.

January 29, 1933 – That this group organized their own congregation, House of Mercy

March 7, 1934 – The name Mount Calvary Lutheran Church was chosen as the official name.

Banquet in 1936, and, reaffirmed in 1941 with an Anniversary Service, this day of dedication is designated as the birth date of the congregation. To some this may seem a simple matter, but our history is different and its beginnings less precise.

1940 – when the world was plunging into the Great War, the time to move forward came again. The chapel was moved and placed in a basement, which was also extended to the south for a future larger building. Services were held in the basement.

1944 – a Christian Day School was established using the upper portions. Courageously they ventured forward, trusting the Lord of the Church.

1950 – even though our nation found itself involved in the Korean War, the congregation expanded and built the basic superstructure of our present church, and also built a new parsonage. Some things were a bargain then. The bell, purchased from the Minneapolis fire Department, cost $10.00. The 29 pews and some chairs cost $2,059.00. The Fifties was the decade of population explosion for this area. Mount Calvary was ready

1953 – the first part of the Education Building was constructed

1958 – the church building was expanded,

1959 – the Education Building was doubled in size and a large gym was added. Young families, establishing their own homes, nevertheless moved forward, even though the debt towered at $310,000 and friends and relatives throughout the state were asked to buy bonds so that the congregation could grow and serve.

1972 – rebuilding the entire basement area, installing new plumbing, heating, and air conditioning, and a beautiful new 25 rank pipe organ. In spite of the exodus of people from the area, Mt. Calvary continued its vigorous living as a forward-looking church.

1980 – it expanded its work and called a Director of Evangelism and Church Growth and a new Principal for the Christian Day School.

1981– it expanded its school to the seventh and eighth grades, and refurnished the church and purchased new pews. It was a dynamic leader in the area for the Forward in Remembrance program of gathering funds for the Lutheran Church – Missouri Synod, of which this congregation has been an active member all of these years.

1995– as the culmination of it’s “Growing in Faith-Building to His Glory” campaign, Mount Calvary built an addition to our Education Building along with four new classrooms and new church and school offices.